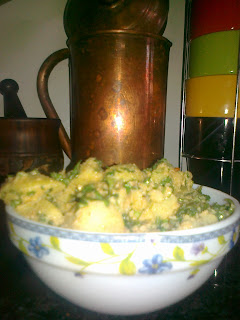 Hi!Nepali cuisine is pretty similar to ours(varied though ours may be from one end of the country to the other)....anyway i noted a couple of recipes down from nepalicuisine.com and this is the first of the lot.Though i tried to stick to the given recipe as much as possible...i just could'nt get myself to use the amount of oil they advocated..that was the only thing i changed....the oher thing that i will do the next time is opt either for the red chilli pdr. or the green chilli..because both together did make things a bit fiery.
INGRDS
1.4 medium sized potatoes..boiled and cubed
2.4 tablespoons sesame seeds(roasted and ground)
3. 1 green chilli finely chopped(i would make this optional)
4. salt to taste
5 3/4 tablespoon lemon juice 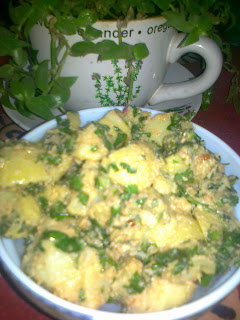 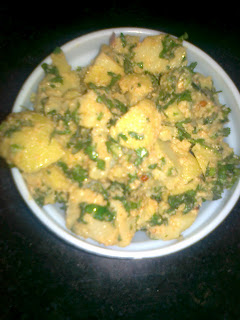 3. Serve.......though its supposed to taste better the next day..i will not know since its all over!Maybe the next time i will make it and keep hidden for a day:)

sending this tohttp://uk-rasoi.blogspot.in/2012/01/flavours-of-nepal.htmlandhttp://www.simplysensationalfood.com/p/simplyfood-events.html and to